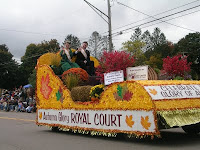 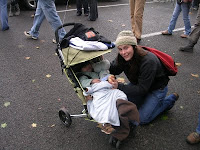 Autumn Glory had perfect timing this year with the leaves in their peak of color. The weekend was a little overcast and chilly but still nice for the Autumn Glory Parade on Saturday in downtown Oakland. We saw our Senator, George Edwards, Delegate Wendel Beitzel, and the Golden Ambassador Art Rooney. This was my second Autumn Glory parade I had been to and I was so excited to take my 18 month old, Brody, to see the parade. However, after a long struggle he feel asleep for the entire parade! If you have never been to the parade, it is a blast. People come early in the morning to set up their food and chairs. Large gatherings can be seen up and down the streets of Oakland. There are balloon guys, my son adored his Diego balloon, bands from all over, Brenda’s Body Shop Thriller Dance, old tractors, and of course the Shriners on the crazy cars!
They changed next years date for the festival. So Autumn Glory 2010 will be October 6-10th.

We saw our first snowflakes this past weekend. Only a dusting, but it was still very cold! If you are coming up this weekend, we are going to have something like an Indian summer with highs on Thursday in the 60s.

One Reply to “Autumn Glory has come and Gone – Here Comes Winter!”