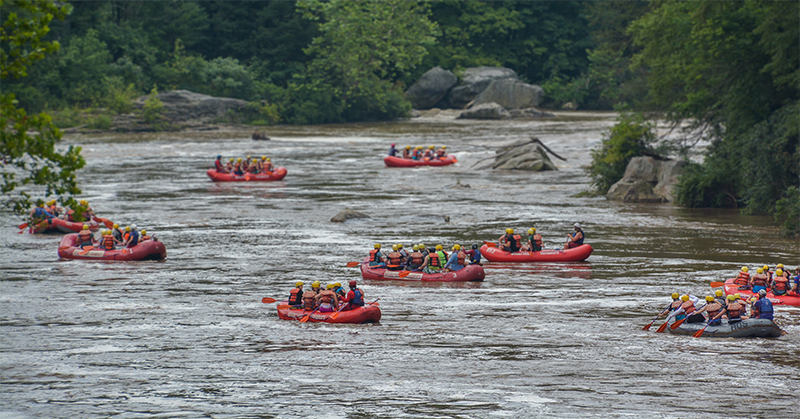 With an appeal all its own, Ohiopyle is well-known by outdoor enthusiasts, offering adventures ranging from mild to wild. It is less than a one hour drive from the Deep Creek Lake area making it an easy daytrip.

The name Ohiopyle was derived from a native american indian word “ohiopehhla” meaning white frothy water – which you will find in abundance on the Youghiogheny River.

Incredible scenery and fun activities draw people to this quiet town in Pennsylvania’s Laurel Highlands. Here are just a few of the “must dos” when visiting: END_OF_DOCUMENT_TOKEN_TO_BE_REPLACED

Throughout Garrett County’s history the Youghiogheny River has been a source of transportation, economic importance and recreation.

The Youghiogheny River was used by Native Americans with canoes for centuries, spending time along its banks for hunting expeditions, trade and even war. When white men appeared in the area, they adopted the canoe as a means of traversing the river.  The first written account of white men’s use of canoes on the Yough was made by a young George Washington.  On May 4th, 1754 he wrote:  END_OF_DOCUMENT_TOKEN_TO_BE_REPLACED

Deep Creek is abuzz with the news that the Adventure Sport’s Center International (ASCI) will host the2014 Canoe Slalom World Championships. Competing with entries from Vienna, Austria and Krakow, Poland, Deep Creek was chosen as the location by the International Canoe Federation in Paris.

This is especially close to our hearts because the 2014 event falls on the 25th anniversary of the 1989 World championships that were held at Garrett County’s Savage River. It also represents the return of world championship whitewater canoe and kayak racing to the United States for the first time since 1989.

If you haven’t been to ASCI’s mountaintop whitewater course (the only one in the world!) it’s a must see for any visit to Deep Creek. They kick off their 2011 season on May 14 with guided rafting tours, as well as rock climbing, rapelling, mountain biking and more.

Congratulations to everyone at ASCI!